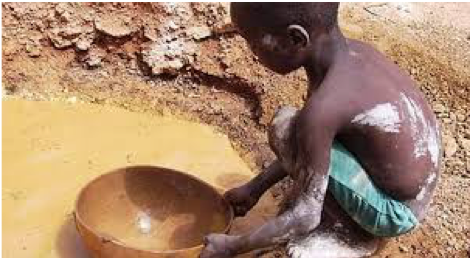 It’s the middle of the night when this little man wakes up. He is only about twelve years old. Nobody knows exactly when he was born. He stretches out on his worn mat. He wears the work clothes he wore yesterday and the days before that. His clothes are dusty and black with sweat, torn in several places. They are more or less just rags and they are much too big for him, but he has nothing else to wear.

He explained that he comes from a faraway village where his family resides. His father “lent” him to his uncle a few months ago. In doing so, everyone is “winning” except for this little guy. The uncle has labor at lower cost, the family has one less mouth to feed. In the rainy season, when he returns home, he will bring his meager income to support his family. For him, as for many children, young adults and even parents, we do not go for fun to the mine. At least… most of the time.

The child rinses his face with some murky water. He nibbles on a piece of bread hardened by the heat, takes a hold of “his” pickaxe, the one his uncle has entrusted to him, and joins the other diggers who are already gathering near the well. Fear grips his stomach. He chews a kola nut to give himself some energy. Then, while the sun is on the horizon and the sky is adorned with pink and orange colors, the child begins to descend into the hole that is as black as night. He clings to the knotted rope as an umbilical cord that connects him to life from above. He slips between a few struts that hold the walls of laterites and finally, at the bottom, he touches the ground. Armed with his pick, a bag made of old canvas and his flashlight, he crawls into a narrow portion of the cave and continues his work of the past days. It is not very deep but still it is heavy, dusty and so dark. He must not think too much. He strikes hard, breaks blocks of granite that he quickly loads into his bag and return to the surface with a rope. And that… is a good part of his day. He will take a break to eat a bowl of rice that one of the uncle’s daughters brought. 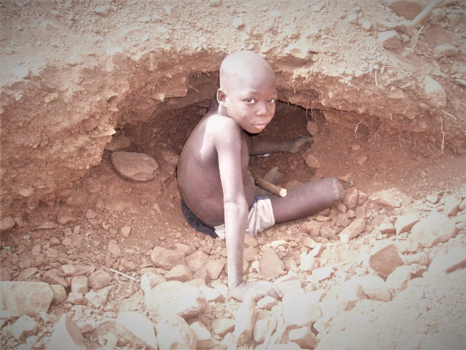 As soon as the children are considered to have a little physical strength, they join the world of diggers. Mostly boys, basically. The girls, for their part, will help with pounding stones, panning in the water or preparing meals for the family and the diggers. All day, under the burning sun, everyone is busy… until dusk. Then, the diggers leave the wells, go back to the “village” and start pounding a few pebbles and then wash the powder obtained, eager to know if their bags of stones contain a little gold. It will be their income. Then finally, the older ones, before entering their hut, will stop to drink a beer and smoke a cigarette. But for our young digger friend, too exhausted, he returns to his uncle’s family. He will be entitled to a meal, again prepared by his cousins. His aunt greets him with a kind smile. She is sad for him. It’s not a life for a child, she says. It would be so much better if he went to the village school, not far from the mine site. But you have to pay a little for that and his parents cannot afford it. So, he has to dig. It’s like that, “c’est la vie”, it’s the only thing this little man, has going for him.

Child labor is forbidden of course, but many are they that go down to the mining wells. Local authorities cannot afford to go to all the sites and check if everyone is abiding by the law. There might be informants on site, to know what is really happening on the ground. Ideally, everything should be done to ensure that children have the right to go to school to learn how to read and write, but one must also think of their family left behind in the village. They desperately need the tiny wages earned from these children. So, here too, we need to find a solution…

Sometimes, when we consider all of these dynamics, we tend to say that we cannot do anything about it. However, I assure you, we must be there, with the miners and especially with the children. Whatever it takes!