On barely visible bush paths, followed by his wife Fatou and their three little boys, Noufou and his family had trekked a very long distance, sleeping at night under a tree, lost in the middle of nowhere, trying to beg for a little food in the villages they passed. They crossed the border hiding from customs officials and the police. And it worked! But the adventure had worn them out. And one day they had arrived. Their destination? A gold mining site that was said to be the largest and richest in the region. The first gold-panner to settle there had only arrived shortly before Noufou. The rumor had reached him as he was scraping a poor plot of land to cultivate a little millet. But the successive droughts had not spared him, so one night he made the decision to go for gold and finally give his family a future.

They settled briefly in the village of the gold panners. Just a cabin with some old tarp and some acacia branches cut here and there. In a short while, he promised Fatou, he would put some sheet metal on the roof of their house that he would buy from the city. The village was huge. Every day, men and women from different countries and regions of the country settled with hope.

Already thousands of gold panners were active in a huge crater of white earth. Women came and went, carrying calabashes of food or water on their heads. Children also circulated between the holes, some carrying a pick axes on their head to go digging. Very quickly, Noufou found a shaft owner who was looking for a digger. He had never done this before. He was only a farmer in his country after all, but he would learn. The other miners would tell him what to do and especially what to try not to do! 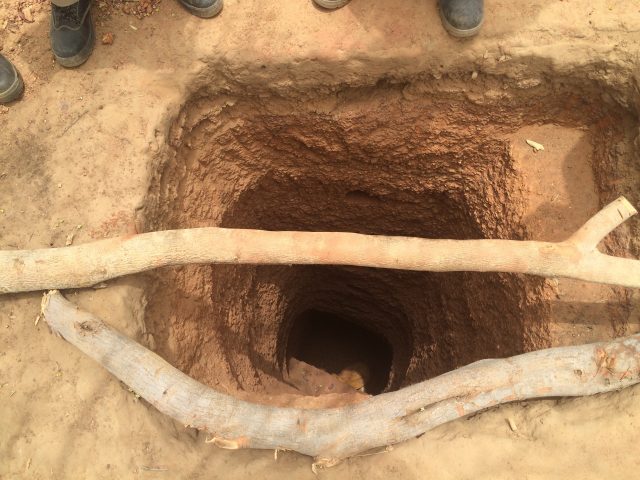 The first time he went down a well, he wasn’t proud. On the contrary, he was trembling with fear. He clung for life to the knotted rope that descended into darkness. Another digger had tied around his head with an old dirty cloth, a flashlight and a digging tool was attached to his wrist by a string. The descent never ended but finally, another “convict” from the mine waited for him, at the foot of the shaft, his face whitened by the dead dust of the gallery. This mining gallery was a narrow, hardly reinforced hallow chamber that sank horizontally parallel to a small, promising vein.

That was Noufou’s daily life. Sometimes he wondered if he had done the right thing by leaving his village and his plot of land. Would he ever be able to earn enough money by digging to finally build a small brick and tin house? He would also like his wife to grow some vegetables to sell them at the city’s weekly market, but to do that you have to find a place that is not contaminated by the hydrocarbons from crushers and old grinders, or by human waste. It should also be ensured that there is water available nearby. A challenge, when he thinks about it. And then, what hurts him the most are these little guys. They are there, clinging all day to their mother’s garment, far from the grandparents they loved so much, unable to go to school in a village a few miles from the site. They are still too small to walk the path and then there is also the problem of the compulsory uniform. How can he buy one for the two eldest? It must be khaki and sewn by a local craftsman. Again, too much of a challenge for him… So, all he has to do is dig and dig again until one day, perhaps, he finds a vein rich enough to earn enough to become the owner of a mining hole. Yes, one day, maybe, it would be nice….

*despite the narrative form of this article, Noufou is based on a father and husband that we met on one of travels to a make-shift mining camp. His story is real, his adversity is genuine, the solution is in our hands.