Since the 2000s, I[1]have worked in the mining space, I’ve been exclusively focused on the world of artisanal gold miners (ASM) and semi-industrial mining . During that time, I have often been offered significant investments to develop industrial operations instead. The world of ASM is too often considered difficult to manage and particularly unprofitable. And as a matter of fact, it seems that the financing of these small-scale mining operations is much more complex than the financing of larger operations. We can understand why and find some sort of justification for this current “state of affairs” if we merely acknowledge short and medium-term return-on-investment and if we would consider the exclusive interests of the shareholders. However, that being said, the world of business is in complete and total metamorphosis and by far the mining industry has not been able to escape this shift. Capital is no longer just financial, it is as social as it is environmental.

ASMs (artisanal and small-scale mining operations), within the context of a semi-industrial mining company seem to be an ideal framework for investments that consider every dynamic that constitute the ecosystem of mining.

Several reasons for this. First, the level of investment for is 10 to 20 times lower than that required for an industrial mining operation, while production costs are 3 to 4 times lower. The profitability becomes fast and relatively unaffected by fluctuations in the global gold market. 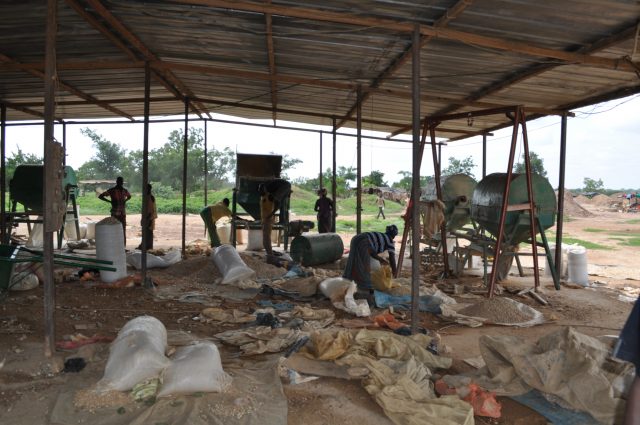 On the other hand, the organization of a semi-industrial mining operations allows both great flexibility of adaptation to the context by the mobility of its equipment and much easier integration into the territory (especially if the approach of this integration implies an anticipatory relational work with the stakeholders of said territory). Moreover, by ensuring the integration of artisanal gold miners (already present and actively working on the mining sites) as proposed by Barksanem™, pacifies and secures the relationships with the community or communities and therefore creates Social License (SLO). In doing so, the securement of mining operations is made possible as well as the digital tracking of ore production. Essential aspects to meet the expectations of the consumer-driven market and therefore to obtain labels related thereto.

Finally, when semi-industrial mining considers the social and environmental impacts, as well as its financial returns, and it includes these aspects in its business model, it ensures the sustainability of its operations, as well as a positive impact on the population and the ecological issues in the various territories in which they operate. In the medium and long-term, its commitments, which go far beyond the financial aspects, will prove to be largely financially profitable. And that is the mission behind Barksanem™’s  Territorial Approach and the corporate values​​ it defends.

The challenge today, as many international institutions and NGOs recognize the value of making room for artisanal gold miners and ASMs, alongside large industrial mines, at the world mining table, is to see the rise of a generation of investors who consider the need and the real profitability to invest in all respects found in ASM.