After a long hour of chaotic and dusty off-road driving, we arrive in the village where we are expected. Looking for some shade, we park the vehicle under a huge ancestral Kapok tree. The « land chief », we called a little earlier, is waiting for us there. He holds in his hand an old bike with a rusty frame, a handlebar that’s missing its brakes and two tires that are literally stitched together! He invites us to follow him on foot to the village chief’s hut. The « old sage » is waiting for us under a straw shelter, he is sitting on a tree trunk, tattered through the ages, surrounded by the elders who constitute the chiefdom. After the standard protocolic greetings and kindly being informed of the current health of each one present as well as the community life in the village, we present the purpose of our visit. We explain that we have retained a gold mining site near their village, that we will undertake some geological studies for which we seek the « accompaniment » of the chiefs. We also tell them that we would like to share with them the vision of our small-scale mining company and how we purpose to be fully integrated into their community and territory. The meeting lasts a long time. My partner translates the sometimes vehement exchanges between them. I understand their questions, their concerns. Then finally, after a moment of silence, the old chief summons someone to bring two chickens to my feet. The agreement is given, we are now part of the community, the village and the territory! 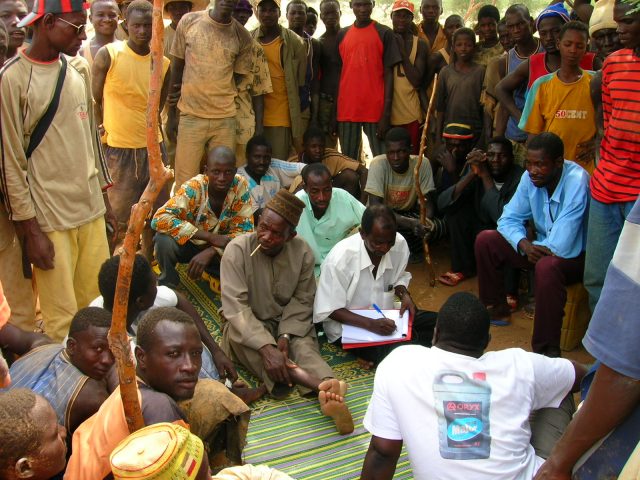 Subsequently in the following days we begin, accompanied by some young villagers, whom the chiefdom has selected. It will take some time but the goal is to organize a mining production unit in collaboration with the artisanal miners that have already been present on the site we’ve obtained and have been working there long before we found it.

This approach is the first step in a series found, in the Territorial Approach, a fundamental component of our mining company and the “Barksanem™ License” we provide.

Through diagnostics and data collection, the Territorial Approach will generate a detailed situational analysis, in order to establish a series of recommended actions for the targeted territory, in respect to the local traditions as well as the social, environmental and economic balances. The results are based on sustainable development criteria in line with the recommendations of the OECD Due Diligence Guidance for Responsible Supply Chains of Minerals from Conflict-Affected and High-Risk Areas, the Fairmined Certification and ISO Standards.